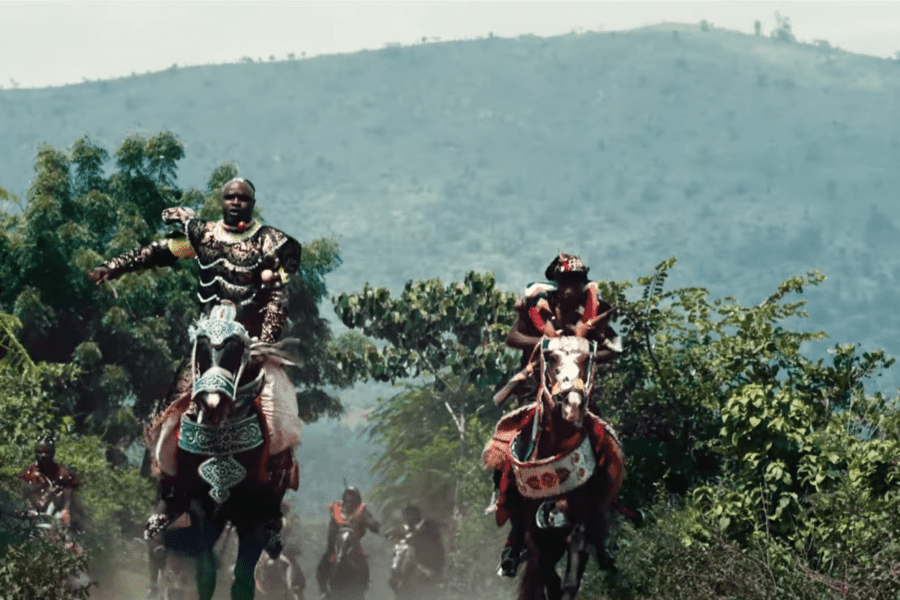 Popular Nollywood actor and film producer Femi Adebayo, has once again wowed us with his amazing screen prowess. His latest work is a movie called ‘King of Thieves’, a story of Ajeromi, a peaceful, prosperous and popular town where all things seemed at their best. Not until a notorious bandit, Agesinkole begins to terrorise this town.

The play starts with a lady captivated by a painting and the narrator (Segun Arinze), offers to tell her the story behind the painting. We are taken back to what the Yoruba land was before civilization, and maybe colonisation. We are introduced to us the rich culture of the Yorubas, the hierarchy of powers in the society and the spiritual fractions of the culture. We see the witches, spiritual beings, masquerades and how each fraction functions in balancing the society as a whole.

The importance of reverence for each one was shown when the king (Odunlade Adekola) went to pay homage to each faction before his coronation ceremony.  Not long after his coronation, Agesinkole strikes. He robs and kidnaps two neighbouring kings who came for the coronation. News reaches the king of Ajeromi and he’s angry.

At this point, Agesinkole’s reign of terrorism on Ajeromi begins in full force. Everyone that dared to challenge him was defeated and in extreme cases, killed. All this was going on, until a man named Oguntade (Ibrahim Chatta) was caught stealing. In the land of Ajeromi, stealing is a grievous offence with death for penalty. Oguntade was sentenced to death but unconventionally so. Instead of getting killed by a snake, he was to face Agesinkole.

Scared for him, his mother, a witch, uses her power to fortify and prepare him for the battle ahead with Agesinkole. It is a battle of chants and what we’ll describe as a show of power. This fight leads to the true revelation of who Agesinkole is, the reason for his evil deeds – laying new rules and the consequences if those rules aren’t followed.

After the story, as the narrator walks away, his eyes roll and turn to those of Agesinkole. This, we believe, was done to make us believe Agesinkole came back to tell his story and subtly remind us of his warning. This epic has raised the bar for Yoruba movies. Even though the animations, voiceovers and effects could have been better, the plot, setting, costume, music/chants and storyline were all delivered with precision. This movie does a great job at not just storytelling, but creating awareness of culture and traditions; with emphasis on spirituality.

It’s also very important that we applaud the makers of this film for sticking to the indigenous language throughout its duration, as opposed to the many Yoruba movies in the past that usually have a good percentage of its vocabulary in English.

All in all, ‘King of Thieves’ is a good watch.